Repair the damage caused by an ancient curse

Advertisement
Based on Jordan Mechner's original game, Ubisoft brings you Prince of Persia: The Sands of Time. The Prince's natural skills combine with magic powers to create an action-packed adventure: gravity-defying acrobatics, crazy combo fighting moves and the ability to shape time.

Prince of Persia: The Sands of Time takes place in ancient Persia, the cradle of some of this world's largest and most mysterious kingdoms. There was once a king who, together with his son, defied the powerful Maharajá, kidnapping the Princess Farah and plundering the Maharajá's palace, making off with many of his precious treasures. Among these treasures was a strange hourglass and a mysterious dagger.

What the young Prince didn't know was that those two objects could make an immortal god of their possessor, who would even be able to control the time. The Prince, tricked by an evil vizier who wanted to steal his magic power, frees the sands of time, and in doing so he destroys his own kingdom, turning all of its inhabitants into terrible sand monsters. Only the Prince, the Princess Farah and the Vizier are saved from the destruction, and now the time has come for the Prince to repair the damage he has inflicted upon his kingdom, and to find his own redemption.

Pentium III or AMD Athlon at 800 MHz or equivalent

Possible second part because I liked the game

Oops, I have tried this game and it is really good, the movements are amazing especially when you lean on the wall to give yourself more momentum in the blow with the sword, to kill the big guys is th... 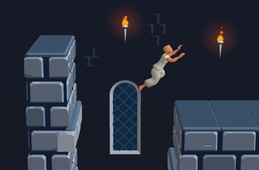 Similar to Prince of Persia

Zuma Deluxe
Don't let the balls arrive to the center!
Plants Vs Zombies
Defend your home of the Zombie attack
Angry Birds Rio
The most famous birds get to know Rio
Angry Birds
The most famous iPhone game arrives in Windows
Angry Birds Star Wars
The Star Wars version of Angry Birds for your PC
Super Smash Bros Crusade
Goku, Sonic, Mario and MegaMan get ready for the last fight
City Racing
Race in illegal racings in big cities with corrupted cops
Subway Surfers (GameLoop)
Play this thrilling endless runner on PC too